In order to ensure urban health and wellness, the people who plan infrastructure for the future need to base their developments on accurate environmental data. Failure to use reliable information allows planners to overlook the consequences of their actions, possibly resulting in a negative impact on the local environment. Understanding these boundaries is an important part of future environmental protection. The integrity of watersheds is vital to all of nature. Therefore, we must address the impact that storm drain infrastructure has had on both watershed and sewershed borders.

Chris Kaeff is joining us to explain some of the ins and outs of sewersheds:

For instance, during peak wet weather events a sanitary sewer can become overwhelmed with storm water inflow and infiltration from cracks in failed pipes, or from direct illegal connections from a building,s downspouts and/or area drains. This scenario reduces the capacity of the sanitary sewer that was designed only to convey sewage, and leads to Sanitary Sewer Overflows (SSOs). This is the challenge in urbanized areas of the country with separated systems, which should not have cross connections within the sewage infrastructure going to treatment and the storm infrastructure going to our waterways. 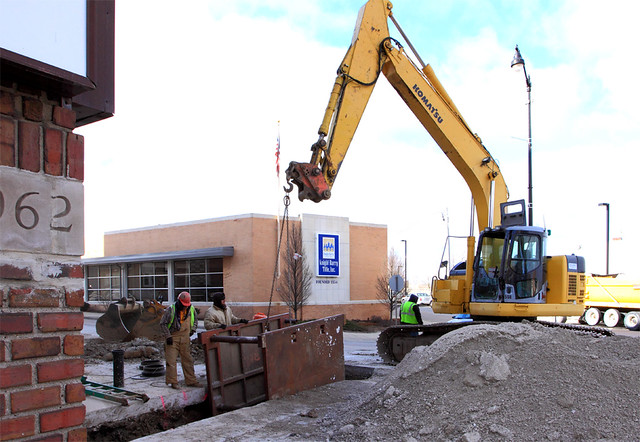 Where boundaries can get complicated are the old urban cores that have combined sewer systems. These systems were designed in the early part of the 20th century and are meant to convey both sanitary and storm flows. Originally, these flows went directly to the waterways. As we developed treatment capabilities and policies to eliminate this continuous water pollution, large interceptor sewers were built along the rivers to connect the old sewer outfalls to the treatment plants (which may be in completely different watersheds). Of course, depending on the geography of the area, infrastructure can mimic the lay of the land, or large pump stations may be needed to force flows uphill.

Combined sewers, while larger than typical separated sewers, are susceptible to the same capacity issues and also overflow during wet weather; we call these combined sewer overflows (CSOs). Very often, the main trunk lines in a CSO system can be old creeks or streams that were hard piped, because they were the main waterways that conveyed waste to river during the industrial age. The challenge of identifying how the combined system works in relation to the watershed can be complicated further if a city has a flood control system intertwined with the combined sewer system.

The end results of combining these built and natural systems, relative to the size of the area and population served, are billions of gallons of combined storm and sewage overflow into our waterways and aging infrastructure that was not designed to handle the development practices of this generation. In terms of spatial disconnection between the natural watershed boundaries and the sewershed boundaries, we are at the mercy of the restrained public budgets that only allow piecemeal capital improvements. While there are many clear opportunities to improve the efficiency and functionality of these systems, the costs are staggering.

The generational challenge is relating the need for clean water, improved environment, and healthy people to an adapted and integrated approach of managing water that mimics nature and finding the political will to invest in waste management infrastructure.”