Topics:
Ways to help the environment and
Crowdsourcing

Pollution abounds. Keystone species are endangered. Good clean water is becoming more scarce. We have environmental problems threatening to end the world as we know it. Do you want to do something about that? We do.

“If you don’t ask the right questions, you don’t get the right answers. A question asked in the right way often points to its own answer. Asking questions is the ABC of diagnosis. Only the inquiring mind solves problems.” ~Edward Hodnett

We firmly believe that we can solve all of the worlds problems by asking the right question. AND it starts with “Why?”

The key is to start small. The big environmental issues are overwhelming, and completely unnecessary to take on as a whole. Even global warming can be broken down into manageable bite-sized pieces for the average person to take action on. Small and simple steps in the right direction will equal giant steps, over time.

Next you have to have an inquisitive mind and good observational skills. Look around. Find an issue that is manageable. Observe the area. Find out what is really going on. Don’t make assumptions, or use your deductive reasoning yet. Just observe the facts.

Once you have the facts all together, you’ll want to use a tool like the one developed by the most interesting man in the world – just kidding – The founder of Toyota and The 5 Why’s. 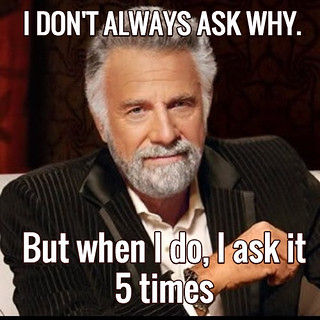 The Five Why’s strategy is a mind tool that is great for solving simple to moderate problems in a linear way. This is NOT a the tool for solving complex outdoor issues, that’s when you should involve a local pro like the Western Reserve Land Conservancy. However using the 5 why’s does combine well with other successful problem solving tools that will help lead to enlightenment!

The theory is that when you repeat why’s FIVE TIMES, the nature of the problem and the solution become obvious. This iterative process involves starting with a problem, and then asking why the problem is occurring, at least 5 times. The number five associated with this tool comes from an empirical observation on the typical number of times that you need to ask why to reach the root problem. You know you’ve reach the root of the issue when you have an answer that points to a process that is not working or is non-existent.

In reality, it may take more or fewer why’s to find a powerful counter-measure to put in motion. OH! and that’s another thing about this strategy. You use counter-measures to create solutions. A counter-measure is an action, or set of actions, that tries to prevent the problem from arising again, while a solution just seeks to deal with the situation. Thus, instead of treating only symptoms, you are getting right to the heart of an issue and are trying to prevent the problem from happening again.

One last thing – It is important that the answers for each why are based on facts and actual observations, not deductions. And make sure you don’t jump to conclusions during the process.

We all have read a lot lately about flash flooding in the news lately. A quick search in Google for “flash flood news” comes up with floods in B.C. Canada, North Texas, Colorado, East Texas, Louisiana, and more. Stream banks collapse, habitat is lost, plants and animals can die. Humans face a lot of problems during flash floods too. We can find charts that show flash floods are occurring more often and causing more damage than they did a half century ago.

Okay. So we have a problem. There is an increasing number of flash floods occurring around the nation. Let’s break it down into a smaller issue. Let’s talk about the flash floods in a particular area, like Pocatello, Idaho. They don’t have the worst floods in the nation, or even their region, but this is a good place to start. Let’s use our powers of observation to find out some facts.

Idaho has it’s share of flooding and Pocatello faces flash floods nearly every year. They almost always happen right after spring thaw and during intense summer storms. The floods occur mostly (or at least most intensely) in Old Town, which is a little bit of a low point in the city. The Portneuf River is cemented and bridged throughout Old Town. The Pocatello storm water drains are few and far between – Houses and buildings are pretty close together in Old Town. Yards are on the small side and many are designed to direct water away from the homes, into the streets.

The problem is that it floods in Old Town Pocatello every year causing damage to homes, and natural habitats.

First Why: Why does Old Town Pocatello flood?

First Answer: The rain and the spring melt-off is a lot of water. It can’t soak into the ground or escape quickly enough.

Second Why: Why can’t the water escape or soak in quickly?

Second Answer: The amount of concrete and pavement in the area is high.

Third Why: Why is there so much concrete and pavement?

Third Answer: Because the homes in Pocatello are built so closely together, not to mention the commercial buildings built close.

Fourth Why: Why is this a problem?

Fourth Answer: This has all led to smaller yards and fewer parks in Pocatello.

Fifth Why: Why is this a problem.

Fifth Answer: Because rainwater needs a place to go. The roads and driveways don’t allow water to soak in, so the water runs to the nearest dirt place, and there are insufficient soaking in areas. (See, here is a process that is inefficient or non-existent; storm water management. Now we know we can stop asking why.)

Other Counter measures to our little hypothises are to check out the EPA’s plan laid out here with examples of best practices for storm water management.

There you have it. Flash flooding in Pocatello, Idaho eliminated! At least in theory.

When you use any sort of mind tool, or problem solving process, it is important to use the right tool for the problem. The Five Why’s could be a very important diagnostic tool for solving some really important environmental issues. Just remember that a solution is not the end of a problem solving strategy. You have to re-evaluate, keep asking questions, and stay involved. 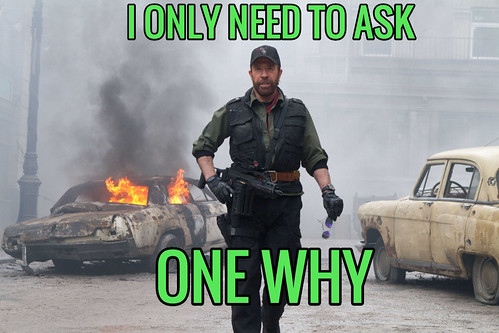