The environment certainly can’t forget the damage that was done. BP’s reputation will likely never recover from their epic failure response and delay in remediating the spill. In an attempt to aid the recovery of the Gulf, BP recently released a new report on the current situation in the Gulf, Gulf of Mexico: Environmental Recovery and Restoration. While the document provides a lot of positive information about the recovery of the Gulf, some experts are suggesting that it is missing some of the key elements and issues that remain of serious concern. The presence of dead zones remains one of these issues.

Dead zones remain a very serious problem for the Gulf of Mexico, and the BP oil spill is largely to blame. While the dead zone in the area existed prior to the oil spill, it has grown significantly in size since. Scientists have estimated the dead zone’s size around 5,052 square miles, which is the size of Connecticut! The oxygen-depleted dead zone continues to grow from contributions from our own back yards. Pesticides, chemicals, and fertilizers drain into the Mississippi river, which flows directly into the Gulf of Mexico. Unfortunately, the water from the Mississippi is unable to make its way to the deeper sea waters and thus we have a dead zone. 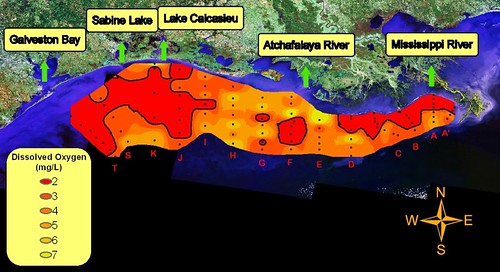 Scientists continue to report high levels of methane bubbling from the well site, essentially sucking the oxygen from the water. This results in the death of all marine life in the area. Fisherman in the Gulf, as well as other researchers, have found strange behavior in fish, crab, shrimp, and other marine life suggesting that fish are being driven from their habitats. In attempt to find cleaner water, many populations of marine life, including sharks, have been found making their way closer to the shore.

The oil spill caused significant oxygen deprivation that can be seen in the death of multiple species of marine life. The Gulf of Mexico’s coral community, in particular, has suffered tremendously. Years after the oil spill, coral skeletons continue to retain evidence of damage. BP attempted to refute their fault in the coral’s damage by stating that it could be the result of other sources of oil, like natural oil seeps. Conveniently this problem became evident only AFTER that BP oil spill.

BP’s 5-year update after the spill leaves some pretty significant data out of the publication. For example, BP failed to recognize the connection between the exposure to oil and high incidences of Brucella infections in dolphins. Marine animal experts have made the connection the exposure to oil can reduce the dolphins’ ability to fight infection, making them more susceptible to developing brucella. Furthermore, BP denied the oil spill’s health impacts on whales in the Gulf stating that the research completed thus far did not find any significantly negative health impacts of whales after the spill. BP failed to mention that research completed by other agencies found sperm whales in the Gulf to have high levels of heavy metals like nickel and chromium which are health-compromising and DNA damaging. The BP report denied disease in reef fish sampled from the Alabama coast. However, other research indicated suspicious lesions and rotting fins of bottom-dwelling fish like Red Snapper, in Louisiana and Florida.

Oil is still showing up on the beaches. The BP reports only an area of 1 mile as being heavily soiled. However, other studies report significantly higher statistics of tar balls, and oil residue showing up on the beaches. Many experts indicate that these residues may show up on beaches for years to come in the future, posing a threat to all of the organisms on or around those areas.

We’re five years down the road, and the BP oil spill of 2010 remains a serious environmental concern. In fact, many scientists suggest that we don’t fully even understand the grave impact the spill has made on the Gulf of Mexico. The water surrounding the well continues to demonstrate dangerously high levels of methane which causes very serious implications for the marine life in that area. As time progresses, and more research is conducted, we will begin to see the full effects of the BP oil spill of 2010 on the Gulf of Mexico.