The Famous Flaming River of Cleveland – The Beautiful Cuyahoga!

The Cuyahoga River located in Northeast Ohio feeds Lake Erie with its 85 miles of winding waters. This river, also known to some as the river that burned, has history. At one point it was a poster child…an example for being one of the most polluted rivers in America.

The city of Cleveland was once a major industrial center in the United States. Moses Cleaveland initially settled his boat in the area knowing the great resources the river and lake would provide to a community. Cleveland, Ohio quickly became populated with business and industry providing a home to the popular names of Standard Oil, Goodyear Tire & Rubber and Republic Steel. This influx of industry and money brought with it a significant amount of waste and byproducts, which were routinely pitched into the river. The Cuyahoga quickly became one of the dirtiest rivers in the country.

While the idea of a flaming river now a days is rather alarming- it was not uncommon during the twentieth century and wasn’t even considered newsworthy. The Cuyahoga River caught fire not one, not two, not three…but THIRTEEN times starting in 1868. The most fatal fire occurred in 1912, claiming the lives of 5 people and the most damaging fire occurred in 1952, resulting in $1.3 million in damages! Despite these disastrous fires, it was the river blaze of 1969 that gave the Cuyahoga its reputation.

The Cuyahoga River fire of 1969 was not the worst fire the river had seen but it certainly caught the most attention. Shortly after the 1969 fire, Time Magazine published a photo from the river’s fire in 1952 and connected the old photo to the 1969 story. The story began to gain national attention. In 1970, National Geographic published “Our Ecological Crisis” featuring a photo of the Cuyahoga and story of its polluted waters. The story of the flaming river went viral. 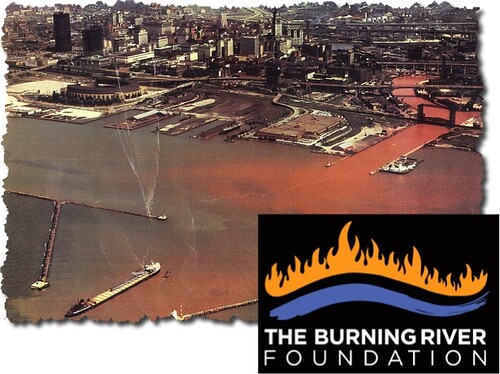 Cleveland Mayor Carl Stokes pressured Congress for federal money to improve the city’s sewage treatment. Stokes’ persistence raised public awareness of the environmental crisis while also securing the funds he requested. In 1970 Earth day was born and the Environmental Protection Agency (EPA) shortly after that. In 1972 the EPA put into action the Clean Water Act mandating that all US Rivers improve their cleanliness to safely allow swimming and fish in the water by the year 1983. This was the most impactful legislation to protect the nation’s natural water sources. The city of Cleveland quickly began to make improvements in waste management. The Cuyahoga River never caught fire again.

The Lasting Impact of “The River That Burned”

The Cuyahoga River located in Northeast Ohio feeds Lake Erie with its 85 miles of winding waters. This river, also known as the river that burned, has history as being one of the most polluted rivers in America. The year 2009 was known to Clevelanders as The Year of the River

In celebration of the Cuyahoga River’s comeback

TWEET after its famous blaze in 1969. The Cuyahoga River today represents a source of recreation as well as industry. Its remarkable transformation represents the result of a vital environmental movement that started forty years ago. The Cuyahoga still lives as does the environmental movement that brought it back to life-both continue to improve and grow. 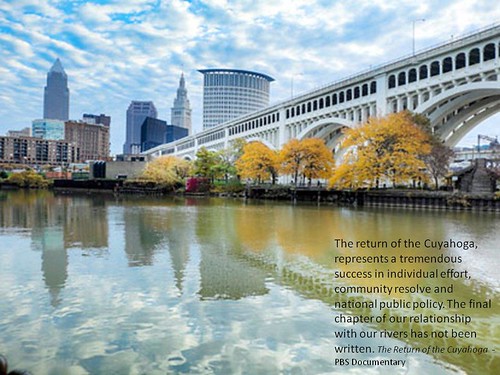