Making a true social impact that provides valuable change in a community can be difficult. Beyond simply getting the dedication of passionate individuals, funding large projects meant to enact social progress can be nearly impossible. Unfortunately, both privatized and public sector money is rarely invested in projects focused on social worth, due to the lack of income it is known to generate.

However, recently several different communities across the world have begun experimenting with a new approach to this problem: Social Impact Bonds.
Also known as a Pay to Success Bond or Social Benefit Bond, a Social Impact Bond attempts to create public progress through teaming up the funds of the public sector with innovative service providers and corporate organizations. 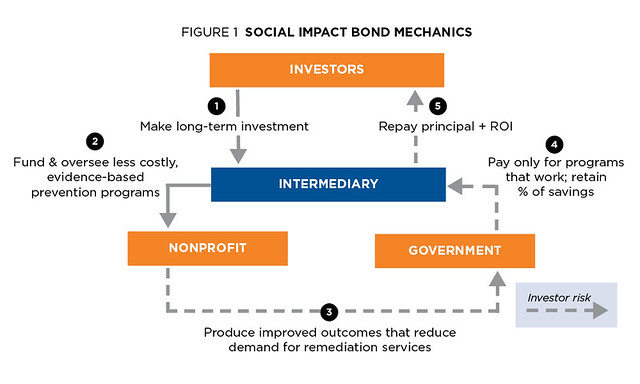 First attempted by the company Social Finance in the UK, this new and exciting approach to public change began being implemented in 2010. The now many advocates of this approach argue that Social Impact Bonds cultivate social progress and innovation, while tackling difficult social problems.

Similar programs often have extreme difficulty finding proper funding, due to the financial risks. By teaming up with companies and providers who will work at a discount in the name of social improvement, the public sector can take larger chances on projects including Social Impact Bonds.
However, these bonds do not offer a fixed rate of return. Initially, Social Impact Bonds were developed to address the paradox that an investment in social problem prevention and preparedness could save the public sector money.

In almost every different country, there is a different name for what are all essentially Social Impact Bonds. However, in the U.S. this type of program is consistently known as a Social Impact Bond in every state. It is legally defined as “a specific type of social impact financing in which funds are raised from Investors to provide Social Service Provider(s) with the working capital to deliver their services.” Most recently in the U.S., Michigan has become the first state to take on one of these projects.

Social Impact Bonds are also called:Pay to Success Bonds because they require a large initial investment in order to achieve a proposed larger investment. For example, if a government were to invest ten million dollars toward decreasing the homeless population of their city by a significant margin, they may be able to close down then unneeded shelters that cost them more than $10 million annually.

Ideally, the service that would no longer needed due to social improvement would save the government at least three times the initial investment of the Social Impact Bond. The rate of success in these projects varies from campaign to campaign.

Even if considered an eventual financial failure, previous investments in Social Impact Bonds have proved to provide numerous benefits for the communities that implemented them. From financial security to public morale boosts, an investment in your community’s future is always a responsible thing to do.

Researching the many successful past Social Impact Bond projects done around the world can give one a sense of the possibilities involved with them. The most obvious benefit of the program is the increased funds for prevention and early intervention programs upon a successful Social Impact Bond campaign. With every new million dollars in your city’s annual budget, there is an increased opportunity to bring the stability of your beloved home to a new level.

Ideally, the money you put into the Social Impact Bond projects will be returned to your community budget. Since investors and companies being paid by the public sector will be under an intense public spotlight, they will be extra motivated to work their hardest. Companies who successfully carry out these Social Impact Bonds open themselves up to endless opportunities within that community. Additionally, by giving the brunt of the responsibility over to these companies, the local government can continue focusing on the other endless duties that they already have on their plate.

If the right privatized candidate is chosen to carry out the Social Impact Bond, you can rest assured that you have can count that person will become involved with the community more than a conventional candidate would.When these programs are successful, it will help attract increased revenue to many important public sector departments, including education, healthcare, and social services. This allows the public sector to further its ability to start new programs that had originally been placed on the back burner.

By decreasing a community’s recidivism rate and increasing its overall public safety ranking, you make your home a more attractive place to both live and start business practices in. This will give a significant boost to your overall economy. Overall, an investment in a Social Impact Bond is an investment in the continued growth of your city’s quality of life.