The term “utopia” was first coined by Sir Thomas More, who published a philosophical tract by that name in 1516 CE. His book described a fictional paradise inhabited by a perfect, peaceful society. The people of Utopia lived without war and settled all disputes rationally. 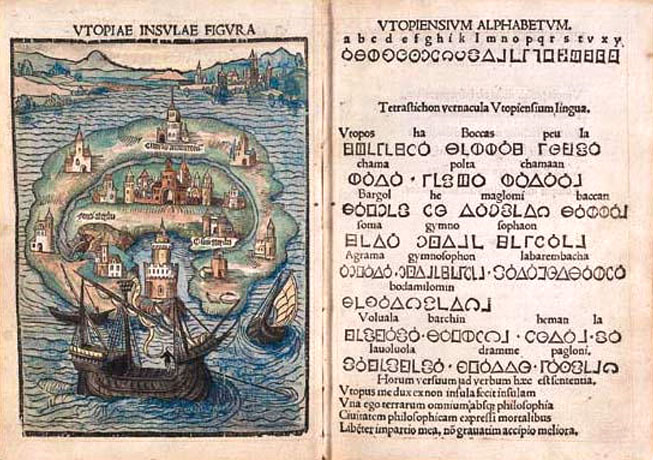 Nowadays, the counterpoint concept of a dystopia is flourishing in the imagination of the American public, fueled by TV news reports about “third world” countries. Dystopian stories tend to depict people in living poverty and violence, often under the control of a chaotic or totalitarian government. Typically, the environment has also suffered at the hands of these authorities.

Suzanne Collins’ dystopian novel The Hunger Games and its sequels have been a smash hit, sparking a companion movie trilogy. The story is set in the future, and most of the United States has reverted to wilderness. There are 13 states, of which only two or three continue to be prosperous. Everyone else is destitute, living in the shadow of a tyrannical regime.

The story’s hero is a girl named Katniss, a talented outdoorswoman who manages to live in harmony with nature. She is familiar with the woods, hunting for her family’s dinner when needed. She takes resources from the environment for the sake of subsistence rather than pleasure or profit.

On the other hand, the people who are running this dystopia seem to take nature for granted. They place Katniss and a number of other teenagers in an artificially controlled environment, where they must fight it out to the death. They randomly control this environment, starting fires, causing avalanches, and even setting killer monkeys on the participants of the “game”.

The Hunger Games demonstrates to readers what could happen if human beings don’t stop using the environment at our whim, solely for our own gain. We need to stop manipulating and exploiting natural resources if we expect to build a safe, sustainable future.

Another popular eco-conscious story is James Cameron’s Avatar, an epic film that contrasts the inhabitants of alien planet Pandora with human beings. Unlike humans, who have already destroyed Earth and are now looking to exploit different parts of the universe, the Na’vi live in harmony with their environment, promoting the wellbeing of all creatures.

As anyone who has seen this visually stunning movie knows, Pandora’s lush greenery and the variety of creatures that inhabit the tangled forest are as close to a wild utopia as human beings can imagine. As long as you know how to keep an eye out for six-legged panthers, that is. Reading these books or watching these movies is not be the same as taking concrete steps to save the environment. But if you’re looking for a little bit of motivation, or you want to teach your children or teens more about what could happen if we disregard the environment, these are definitely worth watching.