Hydrofracking Under the Ohio River in West Virginia 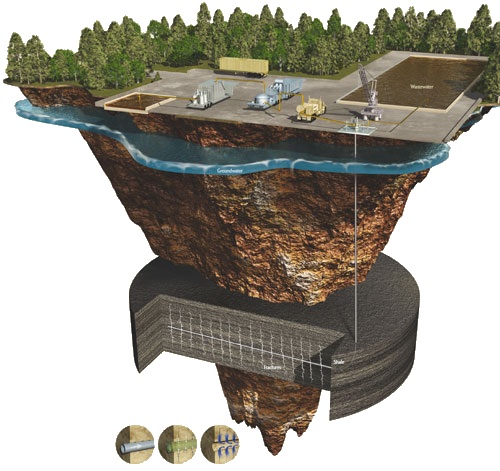 A Greenpeace diagram which illustrates how fracking works.

What is River Fracking?

Under many eastern rivers lie natural gas fields; essentially gold mines to the natural gas industry. This fact has led to river fracking; setting up hydraulic fracturing wells on fresh water rivers to obtain the natural gas that lies beneath.

Horizontal Hydraulic fracturing (fracking) is a newer drilling technology that makes it possible to reach natural gas reserves that underlie parts of Ohio, Pennsylvania, West Virginia and other eastern states. The process of fracking combines sand, water, and chemicals and injects them at high pressures into wells, blasting open shale rock and releasing the trapped gas inside. Once the drilling reaches a specific depth, horizontal well drilling begins. Fracking is a risky practice – it compromises the surrounding air, land, water, wildlife and communities.

Why is River Fracking Becoming Popular?

In a society dependent on fossil fuels, the obtaining of natural gas has become a necessity. As such, the oil and natural gas industry have become particularly vicious in identifying locations for fracking wells. Because of the necessity of having clean drinking water, rivers were always regarded as being safe from practices such as fracking, however, due to stressful economic times and the profits reaped by fracking, several states have sacrificed these rivers and sources of clean water for the sake of money.

River fracturing is dangerous because the practice is so close to large sources of drinking water. This risks the pollution and leakage of fracking waste-water into the drinking water that people consume. The chemicals in fracking waste water have not been fully disclosed. With that being said, these are not chemicals that should ever be near drinking water. We don’t know what it is, or how it will affect human health.

Fracking Under the Ohio River in West Virginia

West Virginia is finding itself on some very hard economic times, to offset these budget deficits, Governor Earl Ray Tomblin has begun taking bids to lease state property under the Ohio River for hydraulic fracturing. One bid is already in and offering $17.8 million up front for a 5 year lease as well as 18% in royalties for the oil that is extracted. The Tomblin Administration sees a solution to their budget deficits in the additional income that can be obtained by leasing portions of the Ohio River. However, they have failed to take into consideration the face that the Ohio River supplies drinking water to more than 3 million people. Fracking under the Ohio River could put the drinking water of millions of people at risk.

Many environmental groups have taken a stand against this move, encouraging the governor to reconsider this plan. These groups have referenced a recent chemical spill in January 2014 that held up the drinking water of over 300,000 West Virginia residents. A larger scale water crisis could hold detrimental effects on citizen health as well as the economy and reputation of West Virginia.

Not only will fracking under the Ohio River compromise drinking water, but may also raise the risk of earth quakes. There is a fault line near the proposed drilling site in West Virginia; this could further increase the risk of future earth quakes in the area. 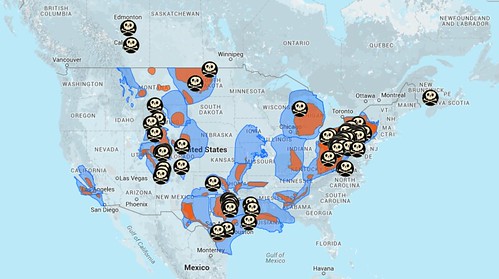 Map By: Earthjustice.org (check this site out!)

The Story of the Susquehanna River?

The Ohio River is not the first river to become the victim of fracking. The Susquehanna River provides drinking water to more than six million people in Pennsylvania. In 2010, a Pennsylvania inspector found that 57,000 gallons of fracking waste water had leaked from storage tanks and seeped into a tributary of the Susquehanna River, compromising the drinking water of millions of people. This case is currently under litigation.

Another case of contaminated water in Pennsylvania has also made recent headlines. The 3 yearlong investigation concerning the contamination of water in Washington County, Pennsylvania has taken some very interesting twists recently. Last week a Pennsylvania Department of Environmental Protection (DEP) Water specialist admitted to not properly investigating the contamination of private drinking water that was suspected of causing health problems to area residents. The contaminated water was near a fracking wastewater site. Further investigation revealed that the water contained high levels of hydrogen sulfide odor, acetone, chloroform and methane. The investigators stated that this was not the result of fracking. Landowners appealed this decision to the Pennsylvania Environmental Hearing Board and the case is currently in trial.

The company responsible for the fracking, Range Resources, was requested several times to provide information about the chemicals being used in the fracking process, but was unable to do so. Range Resources has also recently been fined $4.15 million dollars for dangerous waste water leakage at the same site, forcing them to close the drilling site. This entire disaster has been covered up for the last 3 years by both the Pennsylvania Department of Health and the DEP who have deliberately ignored resident complaints of health problems related to fracking.

How to Stop River Fracking

River fracking is an extremely scary practice as it sacrifices the safe, quality drinking water of millions of people. This is public concern. No amount of money is worth sacrificing this vital natural resource, our water! Take a stand against fracking in your community. Join the thousands of individual who have written to their legislators to stop this dangerous practice. Consider creating a project on Creeklife to raise awareness of fracking. Stop Fracking Our Future is another great resource for information. Make it your mission to get involved. A safe environment and clean drinking water for our future generations depend on it.

Leave a Reply most popular dating apps in austin