After decades, mercury pollution is once again a threat to the aquatic biodiversity of the Great Lakes. The methylmercury level in the water is rising, causing a disturbance to the natural food web. A recent study shows that pollution is already high enough to create pathogenic conditions in the human body.

Mercury is usually found in its inorganic form. Highly toxic methylmercury is the reason for concern, as it builds up and is biomagnified through the food web. The Laurentian Great Lakes, being the world’s largest freshwater ecosystem, should house a great diversity of freshwater life. Methylmercury concentration in an ecosystem usually depends on several factors: inorganic mercury input in the food web, microbial methylation, landscape characteristics, etc. 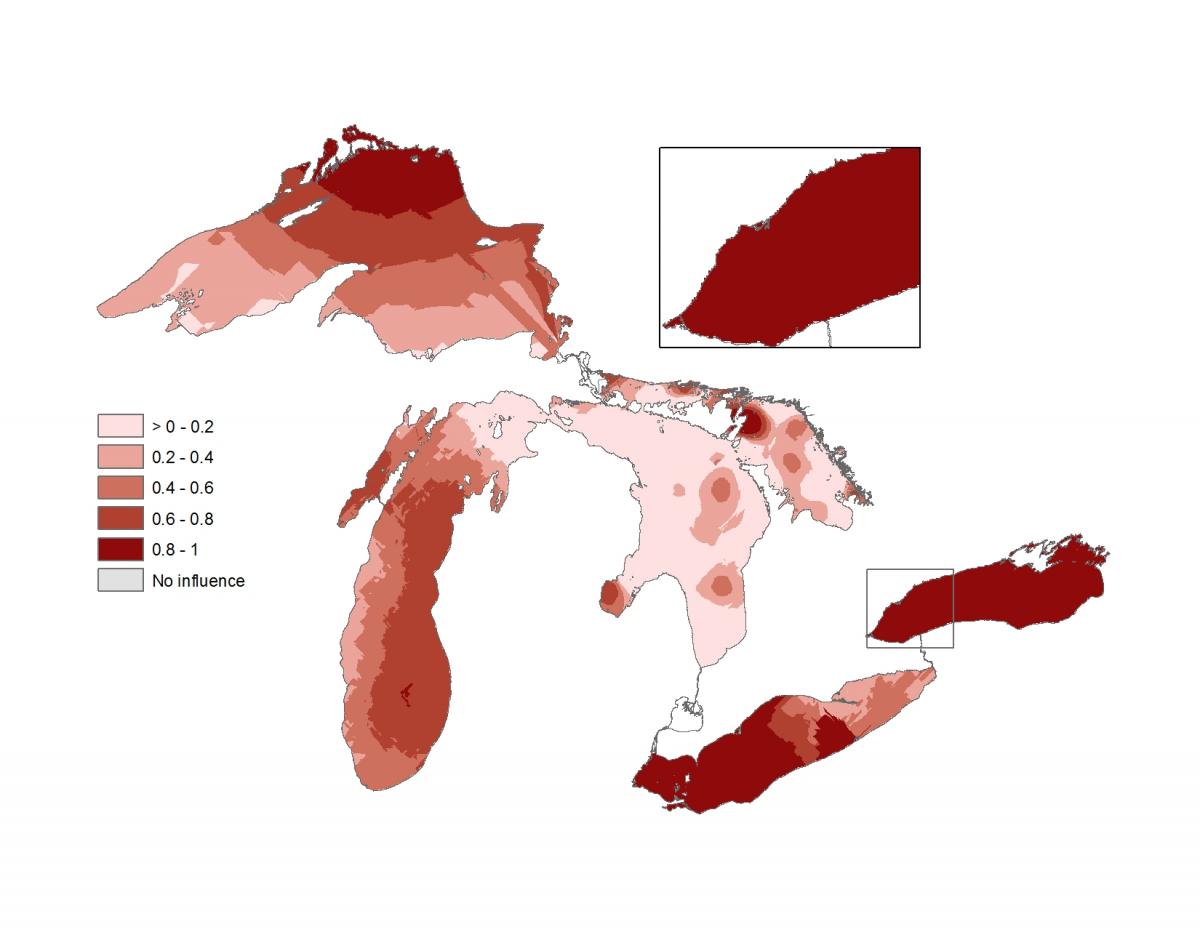 Spatial distribution of mercury as a stressor in the Laurentian Great Lakes.
(Inset: Western Lake Ontario)
At the beginning of the 19th century, the principal source of mercury pollution in the Great Lakes was industrial. The metal smelting factories and other commercial houses were solely responsible for the mercury pollution in the water. Now the source is principally anthropogenic, i.e. produced by regular humans.

A recent study discovered that the food webs responsible for the production of the sport fishes in the Great Lakes are the main sources of mercury input in the ecosystem. This mercury enters into the fish body and then accumulates at each trophic level. That is, if a sport fish consumes three smaller fishes, the total amount of mercury in the three smaller fishes enters into the sport fish body. The study found out that the mercury contamination is high in the populations that are dependent on these sport fishes of the Great Lakes. The fishermen who directly handle these fishes are also at risk of mercury contamination. Mercury contamination brings down the overall health standard of the communities here.

The overall mercury emission in the US has been decreasing for the last four decades. The increase of mercury contamination in the fishes and other aquatic animals in the Great Lakes may be surprising, but it must not to be ignored as it poses an immediate threat to the health of human beings. The causes behind this pollution are not yet identified, so it demands immediate investigation in this field.