There are two facts that I would like to address today. First, Mother Nature follows a very specific, and unchanging set of rules. The more we break, or change, or completely disregard those rules, the more we realize how complex Nature really is. The second fact is that when there seems to be an abundance of something, we ignorant humans generally tend to take advantage and extort that abundance without thought of protecting it. I think we tend to say, “Look how much there is! We could never run out of [insert whatever here!]” Now, I’m not saying that all humans are extortionists. In fact if you are reading this, you are probably the trying very hard to protect our natural resources. I say, “Cheers to you!” but still, be careful whenever you mess with the forces of Nature! 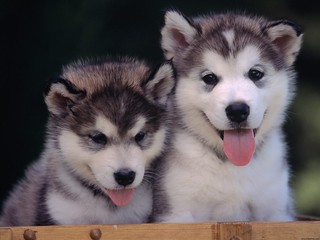 Baby Grey Wolfs
One of the more recent observations that was made on the complexity of the natural world was that of trophic cascades. When you talk about something being trophic, you are generally talking about something related to food (trough, troph… same root!) A trophic cascade refers to the cascading effects of removing, or restoring a keystone predator to the food web of an ecosystem.

Two really good examples of this are:

the Sea Otters and the Pacific Kelp Forests and the Grey Wolf in Yellowstone National Park. Watch the video it has millions of views!

Otters and Seals were harvested, out of ignorance, nearly to extinction in the 1800’s, and many people thought they were extinct. A small population of Otters were discovered in the 1930’s and they have been struggling to recover ever since! Activists, environmentalists, and scientists alike have tried to protect these animals wherever possible. As we learn more about them and their relationships with the oceans, we are amazed at the effects of one species in an environment. When the Otters are present in the Kelp Forests they help control the Sea Urchin Population. If the Urchins are left unchecked, they would overgraze on the kelp and could devastate the entire Kelp Forest.

The Grey Wolf was also over hunted and had not been seen in Yellowstone since the 1970’s. Ever since the Grey Wolf was reintroduced to Yellowstone National Park, beginning in 1994, scientists have observed greater biodiversity, and changing in the physical geology of the park as well. But things aren’t always pretty rainbows and butterflies when it comes to reintroducing apex, or keystone predators. Ever since the grey wolf was reintroduced in Yellowstone, people hear a lot about wolves attacking people, killing animals without eating them, and more.

When we mess with Mother Nature without understanding her rules, we negatively impact the entire population of the world. In the case of ignorant people misusing and mistreating the natural resources around us, I really wish people would stop being so ignorant! In the case of scientists and others who are trying to set Mother Nature aright, I say please be cautious. Your planet is counting on you. Please try to understand how connected everything is, and be thorough in your methodology. We can’t afford to mess up!

So where do you stand with the Grey Wolf being reintroduced to Yellowstone National Park? Please leave a comment below, and don’t forget to head over to Creeklife.com where you can educate the masses, protect your resources, and get involved with your community!