Many of us consider insects as pests because the only time they enter into our awareness is when they bite or sting us or when we find them in places they don’t belong such as in our homes. However without them, the world would be a different place because the ecology depends on them. Here are four ways that insects are Creeklife 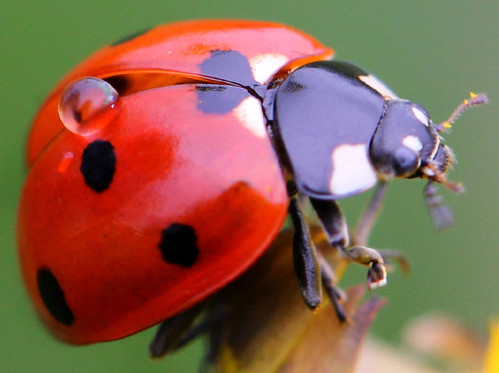 Fun Facts About Garden Insects
They Aerate, Water, And Fertilize The Soil

Many types of insects burrow through the soil which act to break it up and allow air and oxygen to reach the root systems of plants. Plant growth becomes stunted if their roots have insufficient oxygen. Microorganisms within the soil also require oxygen. Insects also fertilize the soil with their droppings. Another benefit of soil loosened by insects is that water penetrates and reaches plant roots more easily.

Flowering plants (angiosperms) have dominated the earth’s plant life for the past 90 million years. Their reproduction is dependent on the transfer of pollen from the male part of the plant (anther) to the female part (stigma).
While many plants depend on the wind for pollination, others have evolved flowers that attract bees with their nectar, scents and colors. Thanks to the bees great mobility and their body hairs to which pollen sticks, they are efficient cross pollinators.

They Accelerate The Decomposition Of Dead Bio Matter

Insects help decompose dead trees, animals, and animal droppings. This allows nutrients that are locked up in dead matter to be quickly returned to the soil for plants to use.

They Are A Potential Source Of High Protein Food

While many cultures have no problems with eating insects, most western countries find them repulsive as a source of food. That is unfortunate because pound for pound, insects contain more protein than beef. They are also rich in vitamins and nutrients.

The large number of livestock needed to feed western populations produce significant quantities of green house gases and consume grain that is best used for feeding people directly. Producing feed for livestock also depletes the limited water in our aquifers. A report from the United Nations A report from the United Nations states that insects can produce 2.2 pounds of insect mass from 4.4 pounds of feed. Cattle require 17.6 pounds of feed to produce 2.2 pounds of meat.

Many types of western food could be considered repugnant if one thought about them in the right (wrong?) way. For instance, cheese is essentially milk that’s gone bad in a controlled way. Cow milk comes from the mammary glands of a different species of animal. Escargot are snails and caviar are fish eggs. Given the impact humans have on the planet, using insects as a food source would benefit both us and the environment.

Insects are beneficial to the environment because they practically are the environment in that they are so pervasive within it. Their small size, colossal numbers, and their sheer length of time spent on the earth (400 million years) have enabled them to become thoroughly integrated with the environment. They are the custodians of the earth.