The building of any low head dams on river systems may have some significant effects on aquatic ecosystems. Adverse effects such as interruption of flood cycles, habitat degradation, flow rate, and watershed alterations are some examples of the consequences of low head dams.

But why build dams in the first place?

River damming has historically been beneficial to people. Large ones can generate electricity, supply water for cities and towns, and used for irrigation. Smaller ones are used to prevent soil erosion, flood control, and reduced river velocity. But while dams may be advantageous to people, they can also adversely affect local ecology and the surrounding environment.

Photo by Doyt on Flickr
The Grand River watershed contains much diverse wildlife, and many are dependent on their habitat to survive. In the case of amphibians, they are extremely important for river and stream communities. Common species of salamanders, such as the northern two lined salamander (Eurycea bislineata) and the dusky salamander (Desmognathus fuscus fuscus) have relatively large biomass and an ability to fill small niches.

For example, the dusky salamander is one of the only predacious species that feeds on invertebrates in North America. Salamanders also aid in energy flow, i.e. salamander feeds on aquatic insect, predacious bird feeds on salamander, ect. They also serve as environmental indicators, a disappearance of them may point to an unhealthy ecosystem. 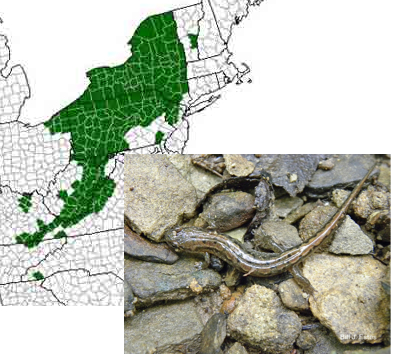 Steam salamanders need access to both terrestrial and aquatic habitats. Since salamanders are sensitive to adverse environmental impacts, the construction of dams along the Grand River could severely impact salamander abundance. Decreased nutrient load can affect the growth and development of larval salamanders. Reduced flow velocity could decrease the amount of oxygen in a stream.

Adult northern two lined salamanders need to lay their egg clutches in flowing water. If the oxygen levels are decreased from reduced flow, this can be harmful towards the eggs. Habitat alteration is another major effect on salamander communities.

Upstream from a dam will have reservoirs as a result from expanding waters, turning it lentic. Lentic waters aren’t the preferred habitats for dusky salamanders; habitats downstream can shrink or dry up streams, which could force salamanders to migrate to a suitable habitat.

But how can we mitigate the problem?

Various species of plants could be placed along the Grand River to ensure prevention of pollution and decrease eutrophication, since Lake County is mostly agricultural. Adding nitrogen or phosphorous in a nutrient poor area could power up a stream in terms of health and thus give the proper biological constituents that salamanders need in order to survive. 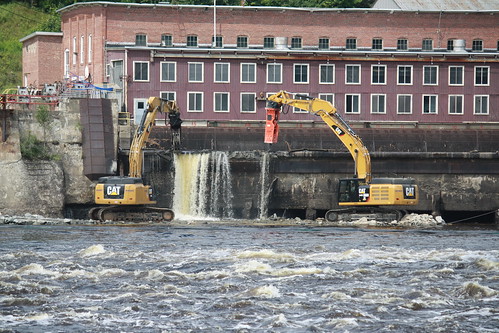 Dam Removal by U.S. Fish and Wildlife Service Northeast Region
Overall, the health and development of all ecosystems is imperative to the sensitive creatures that inhabit our Grand River watershed. By becoming aware of both amphibian and all other species conservation, we can take the first steps to properly preserve the safety of these creatures that are necessary for all forms of life.
References