Topics:Toxins in Freshwater and
phosphorous issues.

Are You HAB-ing Trouble With Your Drinking Water?

If you live near Lake Erie you’ve likely had to deal with harmful algal blooms (HAB). The most recent one in Lake Erie, though not the largest ever, has really spurred some political movement in the fight for clean drinking water. Politicians will meet on August 15, 2014 to decide what needs to be done. 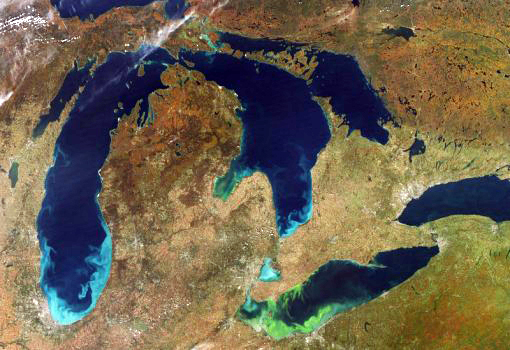 Though there is much political and social clamoring for “what needs to be done,” it’s important to understand why these algae blooms are so harmful.

Not all algal blooms are toxic, even though they may affect the water quality. The ones that are garnering the most attention are the blue-green algae blooms. Cyanobacteria is the scientific name for that blue-green algae. Toxic algae range in color from that lime green you see in the news to a rust red. Certain kinds of cyanobacteria naturally produce toxins, microcystins, which are released when the cells rupture or die.

Algae naturally occurs in lakes, but usually in such small amounts that they don’t cause problems. When there is an increase in phosphorus and other nutrients in the lake, algae “blooms.” These floating clouds of color can be seriously toxic.

In Lake Erie and the surrounding areas, the abundance of phosphorus is being blamed on practices of major agriculture, including the increased use of chemical fertilizers and the practice of putting fertilizers on their fields before the spring thaw. Other things are also contribute to the high levels of phosphorus, including:

Invasive Species: Certain animals, such as zebra and quagga muscles filter the water in a way that sets the stage for the algae blooms. Without natural predators, these species wreak havoc on their environment!

Side Effects of the Toxins

Cyanobacterial toxins can cause a range of health problems. Symptoms can include nausea, vomiting, diarrhea, skin or throat irritation, allergic reactions or breathing difficulties. Blue-green algae can also produce toxins that affect the liver and nervous systems. In extreme cases, exposure to these toxins can result in death. So far, only pets and livestock have died due to exposure to the toxins from the cyanobacterial blooms, but everyone needs to be cautious.

Can’t you just boil it out?

The answer is no. Boiling the water only concentrates the toxins! More than 400,000 people who were affected by the most recent harmful algal bloom near Lake Erie, were warned not to even bathe their children in the water. Other household methods of purifying water such as disinfecting it with chlorine or ultraviolet (UV) light, and water filtration units do not protect people from microcystin either.

In fact, even if the algae dies the toxins can still be present in the water. These toxins can not be detected by taste, smell, or sight. It is important to have specialized tests for the toxins in order to deem the water safe. While there are some household methods of removing the toxins, the equipment to do so can be prohibitively expensive.

The most common and effective way that water managers treat for the toxic algal blooms is by adding active carbon to the water and filtering that out. The carbon attaches itself to the toxins, and when the carbon is removed from the water, the toxins are too. More studies are being done to find the most effective way to remove the toxins from public water.

In Lake Erie, as with many other places, when the algal blooms hover over water intakes for public water utilities, the toxins and the algae are sucked right in. Most treatment facilities don’t regularly filter or test for these toxins, and until recently, many haven’t been able to filter out the toxins. Many utilities have seen an increase in money and resources spent on keeping their water safe since last September’s massive blooms.

Algae that produce toxins can be present in ground water, slow moving streams and rivers, as well as the typical lakes and ponds. Any shallow, warm water is at risk!

Scientists believe that this most recent bloom in Toledo, Ohio is just the beginning. The forecasts predict that algal blooms should peak in September, so stock up on water now and be ready for more days without using your tap water!

News sources are saying that many people are hoping that this most recent algal bloom will act like a catalyst, much like that of the Cuyahoga River Burning in 1969. That event spurred the Clean Water Act and the development of the EPA, which brought the rivers and lakes of that area back from the dead or dying states that they were in.

Now, due to some recent change in agriculture practices, as well as global warming and other factors, our lakes and rivers are facing death again. This time, instead of death by industry, we are facing death by nutrient pollution.

The International Joint Commission issued a list of recommendations in February to reduce the phosphorus loads reaching western Lake Erie, and a bipartisan group of lawmakers from Ohio are holding a caucus to address the growing concerns. Most of the countermeasures that are being deployed involve changing the way we farm. Some people are saying that voluntary change is not happening quick enough, but farmers are saying, “We don’t want to be forced!”

One thing is for sure. Change is coming and not everyone is going to like it. Hopefully, no matter who likes it, folks who rely on Lake Erie for drinking water can breath a sigh of relief knowing that there are people fighting for their right to clean drinking water.

If you want to take a more active role in the fight for clean drinking water, you can! Here are some ways to get involved:

Interested in learning more? Check out the links below for more information on Blue-green Algae!

Department of the Environment – Australian Government