It seems as though almost every day we are introduced to a new idea of how we can best create new energy in a sustainable and effective manner. In a time of rising climate change crises, there is more pressure than ever to find effective energy harvesting methods in order to secure our future. From solar panels on roofs and roads to windmills, the ideas often take advantage of something that already exists in our everyday lives, or simply something that is easy to install.

Lately, the idea of generating electricity from our already in place water systems has been gaining traction throughout the United States. Simply put, the idea is to install pipes containing turbines in place of our already existing water pipe systems. Such pipes would allow the water that flows beneath our feet during our day-to-day lives to generate energy that we can use in other aspects of our communities. Beyond sewage or city water pipes, this technology could be easily adapted to fit any industry that uses free-flowing water systems. 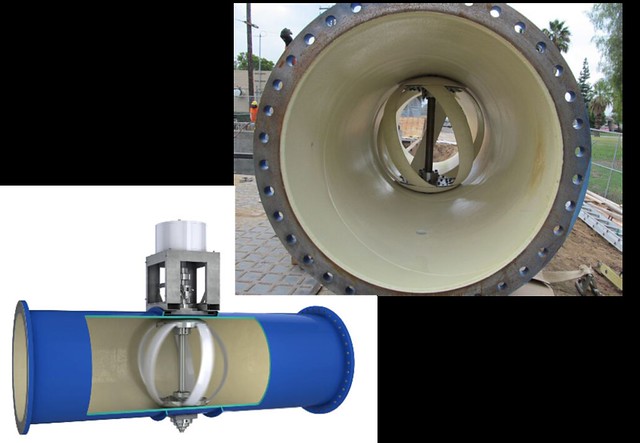 Some U.S. cities have already begun to tackle this possibility with their energy initiatives. Portland is one such example, who along with Lucid Energy, have been working on installing several such pipes throughout the city. The pipes are expected to be functional sometime during the month of March, and local officials are very positive about how effective they will prove to be. Currently, it is estimated that the few pipes already installed will bring in around $2,000,000 a year in renewable energy over the next twenty years alone.

The potential to use such a basic tool in order to harvest clean energy provides an attractive, and less problematic, alternative to other tools, such as windmills or solar panels. Several key attributes of the turbine infused water pipes make them particularly attractive.

While solar panels, windmills, and other similar technology have been proven to harness lots of energy for little investment, they have one major downfall; they rely on the weather conditions of a location being reliable. In a time where, due to global warming, the weather patterns of our country have become more sporadic, this can turn off many people who are looking to make the turn to a cleaner energy alternative.

Thankfully, turbine infused water pipes have no major reliance on the weather of a particular area. As long as there is a sufficient amount of circulating water to travel along the turbine pipes path the technology will provide clean energy. This ability to sustain itself so easily makes the pipes a highly attractive choice for those cities looking to make a positive change in their energy policies. 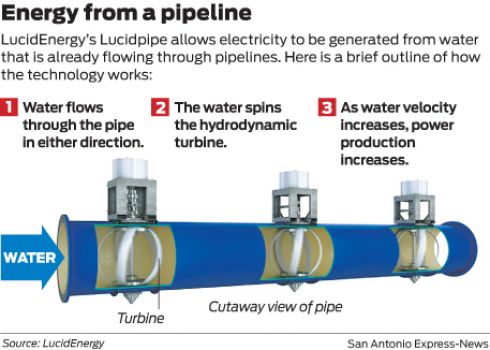 More Eco-Friendly Than Many of the Alternatives

Since these energy generating turbines are located inside of the pipes and provide their benefits from kinetic energy alone, they do little to affect the environment around them. Hydroelectric, nuclear, and several other energy sources that are currently being explored have a much larger risk of environmental contamination or even disaster.

In these tumultuous times of presently happening, and just over-the-horizon, environmental disasters the ability for clean energy tech to have minimal environmental impact is of utmost importance. Lucid Energy’s technology would allow cities to install turbine pipes in areas that would otherwise be blocked off completely due to environmental protection or concern.

Unlike many other energy alternatives, the turbine powered pipes have the potential to run themselves with almost no outside help. As long as the turbine pipes exist in areas where water has a natural downhill flow, it could avoid heavy electricity usage, which would offset any potential energy gained from the technology.

Another advantage the tech holds in the self-sustainment department is how often it would be able to run. With water sources constantly flowing through such infrastructures 24/7, energy is harvested around the clock. Once again, this is an area where the tech sets itself apart. With solar panels and windmills you need weather conditions, and with nuclear and hydroelectric power you need constant human monitoring.

Speaking of which, the current pipe technology being made by Lucid can also self-monitor itself, unlike regular water pipes. The current pipe tech can both monitor the drinking quality of the water flowing through it and the overall status of a city’s water supply network.

Keeping our focus upon the most promising clean energy alternatives being offered will help our nation to shift through the massive pile of potential routes being presented every day. With the turbine pipes’ relatively inexpensive installation costs, self-sustainability, eco-safeness, and self-sufficiency, they seem likely to become the next big thing in clean energy tech.

Once the project has had sufficient time to run its course in Seattle, the tech’s ability to help preserve our planet will become clearer. Until then it is important that this initiative, as well as other similarly promising ones, is kept relevant within public discussions about energy policies. Clean energy, after all, is a key factor in the stability of our nation’s future.