Some of the most endangered or threatened animals in and around the Florida Everglades are reptiles, including turtles, snakes, lizards and the American crocodile. Deliberate attempts at extermination, capture for the exotic pet trade and harvesting for meat, shells, skins or eggs all add to the usual problems of habitat loss and pollution.

Of the 16 species of turtles in the area, at least five are threatened, endangered or critically endangered. These are the sea turtles. Of the seven species of sea turtle in the world, five visit Florida and they are all in danger. The loggerhead is the only one classed as “threatened” rather than “endangered” by the National Parks Service, although the International Union for the Conservation of Nature does list it as endangered. 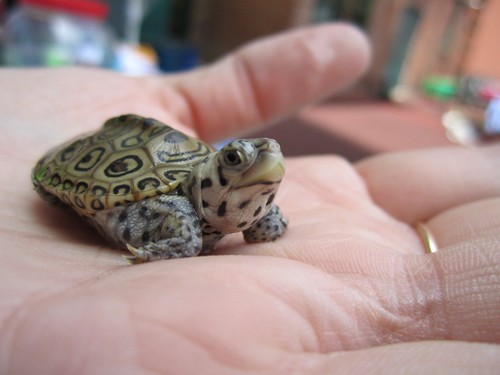 Baby Terrapin from the Everglades

Major threats include hunting for their meat, collection of the eggs, loss of nesting beaches, loss or degradation of ocean habitat, chemical pollution, and entanglement in plastic trash or abandoned fishing gear. Lights from hotels, residences or other buildings near nesting beaches also cause problems, as the turtle hatchlings use moonlight to navigate. Artificial lights mean they go the wrong way and may never reach the ocean.

The freshwater turtles or terrapins in the Everglades appear to be holding on, although they have also suffered from habitat loss and pollution. Harvesting of these animals for food and the exotic pet trade can cause serious problems and has a significant impact on the birth rate and on the long term population of these beautiful species. . For example, hundreds of thousands of snapping turtles (Chelydra serpentina) are taken from the wild every year. Regulation of the practice helps to an extent but illegal collection still occurs.

The Everglades have one snake known to be endangered, the eastern indigo (Drymarchon corais). Data is sparse on several others, with scientist uncertain of the population size and whether or not the species is threatened. The populations of some, such as the eastern diamond-backed rattlesnake (Crotalus adamanteus) are decreasing but not fast enough to be in immediate danger of extinction. 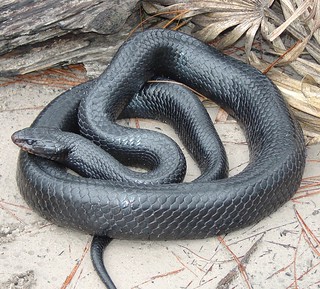 The eastern indigo snake (Drymarchon corais) has disappeared from large areas of its former range, mainly as a result of habitat loss, collection for the exotic pet trade and the gassing of gopher tortoise burrows. Protective legislation and reintroduction programs in Florida appear to have been moderately successful.

Although populations of some lizards, including the island glass lizard (Ophisaurus compressus), are decreasing it is not known if any are in immediate danger. As with snakes, they have to contend with less habitat and more pollution, and in some cases capture as pets. 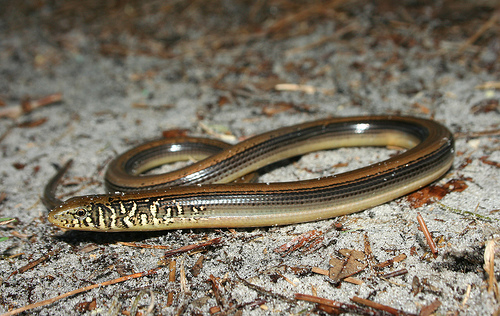 Native lizards also have to compete with a number of exotic species. There are at least 6 new lizard species in the Everglades with thriving populations, most likely escapees or deliberately released by owners who didn’t realise how demanding pet reptiles can be.

Three different crocodilians inhabit the Everglades: the American alligator (Alligator mississippiensis), the American crocodile (Crocodylus acutus) and the caiman (Caiman crocodiles). The first two are listed as “threatened” by the U.S. Fish and Wildlife, although numbers of American alligators have increased in recent years. American crocodiles are still in trouble, mainly from habitat destruction and alteration. Water diversion to and from the area makes areas unsuitable for adult crocodiles and can dry or saturate eggs to the point they die before hatching. 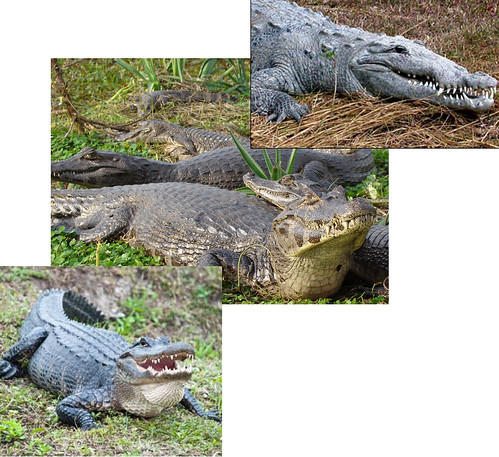