2014 has already been a bad year for the watersheds of West Virginia. March has barely started, but the state has suffered three major spills. The result is a dangerous increase in the toxicity of local watersheds. There were two separate spills from Freedom Industries, which is in Charleston, West Virginia. Patriot Coal Corporation, located near Winifrede, had a coal sludge spill which resulted in further contamination shortly after the spills from Freedom Industries. 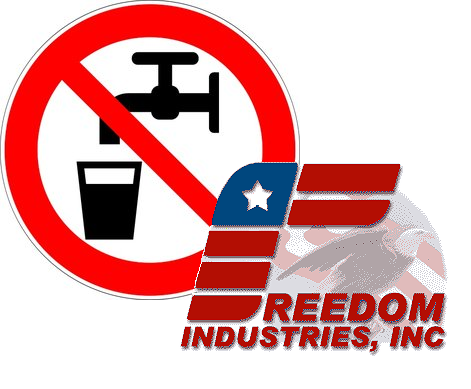 The two spills from Freedom industries released over 10,000 gallons of MCHM in the water supply. MCHM is a compound which little is known about. The chemical is supplied by the Eastman Chemical Company in Kingsport, Tennessee. However, the compound isn’t very well researched and the material safety data sheet related to the compound is mostly blank. There is simply no research into long term effects, but studies show that exposure may cause damage to kidneys and the liver. The level of toxicity is supposed to be low, but only time will tell.

The first spill from Freedom Industries released 6,000 gallons of MCHM directly into the Elk River. Elk River is part of the Mill Creek/Elk River watershed. The spill of MCHM resulted in complete loss of drinking water for several counties in West Virginia. The leak occurred on January 9, 2014, and less than a month later another spill occurred, on January 31, 2014. The second spill happened because a contractor working at the plant hit an underground pipe. Unknown amounts of MCHM were again released into the environment. This time the company insisted that the chemical did not enter into the river and that the spill was under a hundred gallons. However, the chemical is bound to enter the watershed as it leaches through the soil. This spill, in combination with the first one, released over 10,000 gallons of MCHM. A strange side note is that the company didn’t know what the damaged pipe was for, and it wasn’t shown on any maps of the site. The company was only able to recover about 1,300 gallons of the spilled chemicals and the rest went into the water supply and the ground.

On February 11, 2014 the area of Charleston was hit with another chemical release. A coal ash spill from Patriot Coal released 108,000 gallons of waste into a stream feeding into the Kanawha River. This spill released the slurry into the Rush Creek/Kanawha River watershed and was enough to turn the creek black. According to the company this spill isn’t a danger to the regular water supply since it wasn’t close to a water supply intake. However, it is still going to contaminate the watershed. Coal sludge is full of heavy metals and other toxic chemicals. The list of possible compounds in the spilled slurry is very large, but specific measurements aren’t available.

We really need to start putting more effort into protecting our groundwater. Spills like these are a common occurrence in areas where fossil fuels are mined or produced. Heavier monitoring is essential, but has been steadily decreasing due to political pressure. For example, the Freedom Industries plant had not been inspected since 1991. This shows just how lax inspection and enforcement is regarding these companies. We need to start putting more pressure on our representatives and leaders to ensure that incidents like this come to an end.