Clevelander’s are taking action that really helps show the city’s commitment to clean water and how it is an important resource that the city has. It is an asset that every North Eastern Ohioan knows, the Lake and it’s rivers are one of the greatest assets we have and Creeklife agrees! Read more to learn about this great initiative that the city’s mayor Fred Jackson has started and learn more about the Year of Water 2015.

The Year of Water is part of the Sustainable Cleveland 2019 campaign. This ten-year long initiative brings together different members of the Cleveland community in an effort to improve the economic, environmental, and social well-being of the citizens. People all over the city and surrounding areas come together to work toward making Cleveland thrive. 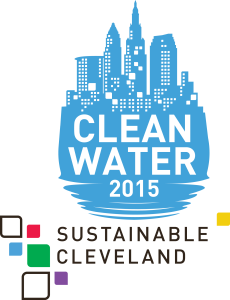 is important everywhere. In the Cleveland area, it tends to be an underappreciated resource. That unfortunate fact is what spurred the Year of Water. This movement is a collaboration of the mayor of Cleveland, Frank Jackson, the city’s Office of Sustainability, the Water Department, Metroparks, the Northwest Ohio Sewer District, and the Cleveland Water Alliance and includes several local groups. Their aim is to host various public events in an effort to inform the Cleveland area residents of the importance and value of Lake Erie as well as other water sources. There is a push to make the people aware that the water provided from the lake and other sources is important to the economy, environment and recreation.

The campaign kicked off on January 23 of this year with an event at the City Hall Rotunda. It featured city departments, non-profit organizations, and local businesses sharing information about what they are doing to improve the fresh water in the Cleveland area. The campaign will have other events throughout the year that focus on working with citizens to show them how to restore, conserve, and protect the water they rely on daily.

The Year of Clean Water initiative is important to Cleveland and the surrounding areas for many reasons. Lake Erie is the 12th largest body of fresh water in the world. It is the responsibility of the citizens of the greater Cleveland area to take care of the precious resource. People in Cleveland often benefit from the lake without even realizing it by using it as a fishing hole and swimming pool. The lake is responsible for supplying Cleveland with drinking water and also is a major factor in the sustenance if its economy. Without Lake Erie, Cleveland wouldn’t the successful city that it is. Since there is such great import in this body of water, it is essential that those who benefit from it the most are the ones who take care of it.

Lake Erie and the other fresh water sources in the area provides means for Clevelanders to live successful, fulfilled, and fun-filled lives. In return it is the responsibility of those same people to take care of their most important resource. The Year of Water is a time for all Clevelanders to work together for the betterment of their city and the improvement of their water.