The Grand River starts its journey in Geauga County and Portage County and follows a northern course into Trumbull and Ashtabula counties. From there, the river turns west into Lake County and flows into Lake Erie. The Grand River watershed is divided into two parts: the upper watershed and the lower watershed.
The upper portion is the southern part located in Portage, Geauga, and Ashtabula counties, while the lower portion is the northern part located in Geauga, Ashtabula and Lake counties. Since we live mainly in an agricultural area, many of the nurseries use herbicides, pesticides, and insecticides to protect crops. We will be looking at Carbaryl and how it could affect the Grand River watershed, since it is a common insecticide. 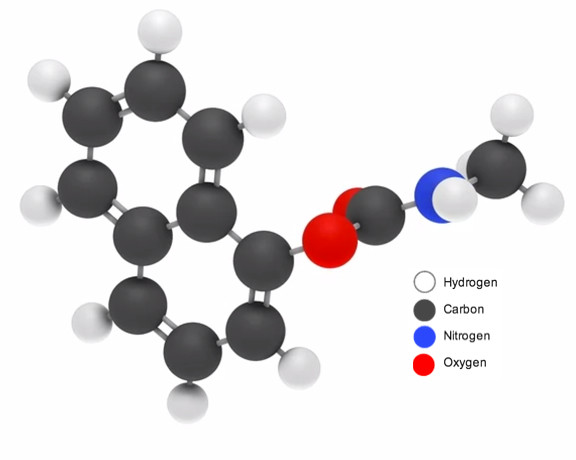 Carbaryl is a chemical in the carbamate family, It is a white crystalline solid
Carbaryl is an insecticide, but can also be used for a molluscicide and an acaricide. The chemical name is 1-Naphthyl Carbamate and comes in a white crystalline structure that is only slightly soluble in water. It controls insects such as beetles, ticks, cockroaches, ants, and mosquitoes, and the insect can either ingest the chemical through their stomachs or with direct contact outside the body.
The insecticide can be sprayed on plants in the form of dust, wet powder, or liquid concentrations. When carbaryl breaks down, it gives off less toxic by-products by decomposing in water, soil, and on plants.

Sold under the trade name of Sevin and distributed by Union Carbide, the insecticide can be found in all forms located in soil, water, groundwater, and air. Accumulation doesn’t pose much of a threat to the environment since it breaks down readily in alkaline soil and water, but it still can occur if found in large amounts and can be toxic to fish, birds, and humans.
In an aquatic ecosystem such as the Grand River and its watershed, carbaryl breaks down differently, dependent on the type of water. In streams and rivers, carbaryl breaks down 50% in 24 hours, but has a slower rate if found in mud in an aquatic environment. In lotic bodies of water, such as ponds or bogs, bacteria help the breakdown process, and have a half-life of 1-32 days.

How can carbaryl affect the Grand River and its watershed? Toxicology studies have shown that the acetyl cholinesterase inhibitor found in the insecticide was found to cause heart malfunctions and irregular heartbeats in zebra fish. The embryos of zebra fish have also found to be affected by low concentrations in a 24-hour period, such as malformations of the tail, red blood cell accumulation, and then death.
A study was shown that carbaryl caused bradycardia in embryonic zebra fish, in which the affected group had a lower heart rate than its control group, but once the insecticide was removed, the heartbeat returned to normal. Watersheds contain natural features such as flowing and standing water. Native fishes could be affected by this insecticide if there is too much accumulation.
Other aquatic organisms such as zooplankton and macro invertebrates can also have physiological problems; studies have shown that exposure to carbaryl reduces the reproductive rate of Daphnia ambigua.

Other habitats in the watersheds, such as wetlands and vernal pools, are home to many organisms, such as birds, reptiles, and amphibians.
Carbaryl does break down readily in these areas due to the bacteria, but can still be harmful. Carbaryl has been found to cause defections in fetal mice, bent tails in tadpoles, and abnormalities in limbs on salamanders. These organisms are quite common and beneficial to our watershed; any damage done can be harmful to the entire ecosystem.

The Grand River watershed is important, not only to its native animals, but to humans as well. A number of people swim, fish, and kayak in the Grand River regularly. Carbaryl can be harmful to humans if breathed, ingested, or comes into contact with the skin.
Health risks include burns, damage to the nervous and respiratory systems, blurry vision, convulsions, and incoordination.
Although no fatalities have been reported, mutagenic effects have been observed in cell mitosis and in chromosomes.

Carbaryl is just one of many insecticides used for agricultural purposes. It is still used today because of how effective it is. Being aware of what can possibly be in our Grand River watershed, and being educated on the importance of watersheds in general, can be helpful in protecting our environment.
We depend on the Grand River as a source of food, water, and recreational activities; not to mention the habitats and its organisms that need the watershed in order to survive.

Written by: Shannon Doherty
Thank you!