My friends, put on your science hats. It’s gonna be a wild ride. 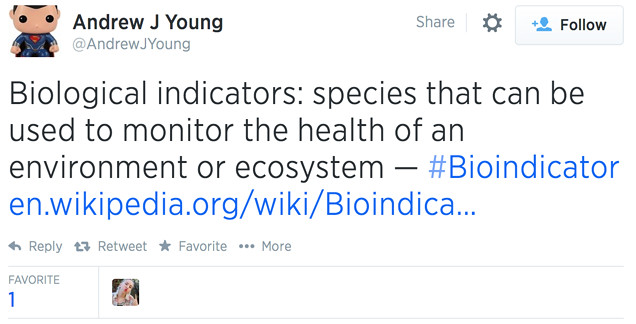 Bioindicators are living signs that pollution is happening, often in the form of microbial organisms like algae. Certain kinds of algae are found to bloom in the case of aquatic contamination of heavy metals or insecticides. Microbial growth can be detected by measuring the turbidity of the water. Several microbial communities grow in direct relationship with the heavy metal contamination of US watersheds.

These microbes feed on heavy metal ions, or incorporate the metals into their metabolic pathways. Thus, their growth is enhanced when their house (the watershed) is contaminated. We can draw conclusions about the heavy metal contamination of a given watershed by measuring the microbial growth, using simple techniques like colorimetry. 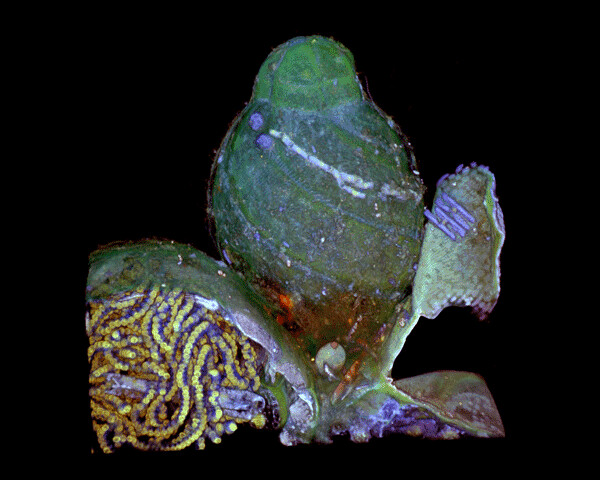 Arnold Arboretum: “Confocal microscopy was used to create this 3d model of the reproductive structures of Chara, a green algae and common inhabitant of New England ponds.”

Chara is an algal species. Some of the common blue-green algae may act as a bioindicator in a watershed. Though the study of bioindicators is in full swing, little is known about their existence in the watersheds of prairie wetlands.

In some cases of hydrocarbon pollution, the species richness of microbial bioindicator communities in prairie watersheds is devastated. This may not occur in the case of heavy metal ions. Hydrocarbons can be toxic to algae and microflora, but heavy metal ions are usually taken up and used during several pathways of the microbe body.

Some experiments and observations have found that the chemicals which affect the growth of vascular plants may have the same effect on the microbial bioindicator communities. But this is not always the case. On occasion, bioindicator microflora are more sensitive than vascular plants, especially with regard to chemicals that inhibit photosynthesis. These chemicals, such as triazine herbicides, usually affect the microbial communities more than other chemicals like atrazine, etc. A test with 23 chemicals of this type was conducted and this result was found: a change in the microfloral biomass and density occurs in some cases of heavy metal composition.

No detailed study has been done yet on the bioindicator communities of prairie wetlands. Relevant works in this field are going on world-wide. Bioindicators help environmentalists and scientists quickly find out the nature, type, and severity of a contamination.

Whew. You can take off your science hats now. Thanks for sticking around!