The North American beaver (Castor canadensis) has had an uneven history. The species once thrived throughout much of the United States and Canada. However, as European colonists started to spread farther and farther west, the animal’s thick, waterproof fur made it a target. Vigorous hunting and habitat destruction wiped out or drastically reduced populations of beavers throughout North America. By the 19th century, they were extinct in numerous places and scarce in others. Nowadays, regulations on hunting and trapping, along with reintroduction programs, have restored beavers to many parts of their former range. 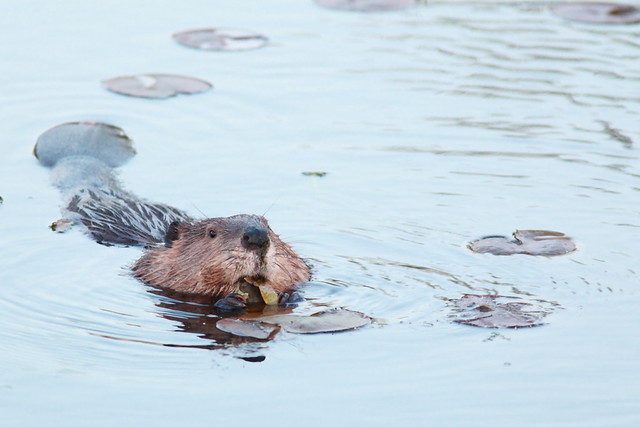 A beaver snacking on lily pads, photographed by Emmanuel Miranda.

In Ohio, beavers had disappeared by 1830. During the middle of the last century they began to resurface, and not just because of deliberate reintroduction. According to a 1949 article in The Journal of Mammalogy, early signs of the species’ return were seen in 1936, in the form of bark-stripped trees. The article suggests that these beavers came from neighboring states, fur farms, and release by sportsmen. A single beaver was observed to have made its home in Belmont County. By 1946, beavers were numerous enough to be regarded as a pest on occasion. Today, the species is widespread throughout Ohio, including the Grand River Wildlife Area.

Beavers are the third largest rodent in the world, and the largest in North America. Physiologically, they are very different from their rat, hamster, and squirrel relatives. The species is known for building. Beavers work to control the flow of streams, mainly by constructing water-slowing dams. This provides better conditions for their other work; they create elaborate multi-roomed lodges for shelter and breeding. Beavers live in small social groups of related individuals. Their diet consists of very coarse plant material, especially tree bark. 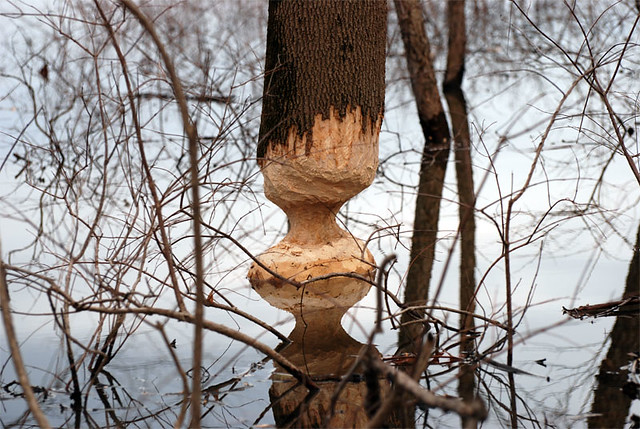 Beavers change their environment profoundly, by creating pools in streams and small rivers, and by stripping or felling trees. Other animals have come to depend on these pools; the return of beavers often means a corresponding increase in waterfowl and certain types of fish. They also affect surrounding vegetation, and not only in a destructive way. Their activities can help control erosion and flooding. Unfortunately, changes made by beavers are not always welcomed by local humans. On occasion their dams cause floods rather than controlling them.